Shortly after midnight on Saturday, April 14, 2018, I had a dream in which I was at the staging area for that morning’s Newport marathon, but I had not yet checked in for the race or stored my belongings even though it was 7:13 AM, just 17 minute shy of race time. Frantic, I was trying to figure out how I was going to take care of these logistical to-do items and get to the starting line on schedule. Then I woke up.

Approximately seven hours later, I was at the staging area down in Newport for the actual marathon. The truck containing the mobile locker I had rented in advance was mysteriously not there yet. Confused and anxious, I wondered what I was going to do with all of the gear I had planned on locking up, including my wallet, keys, phone, clothes, and post-race snacks. Standing there feeling somewhat paralyzed by uncertainty, I took out my phone and checked the time. It was 7:15 AM. (Premonitions allow for a two-minute margin of error, no?)

Midnight clairvoyance and the subsequent inauspicious sunrise set the tone for the rest of my day. Eventually, I got in line for gear check, an unsecured area for runners to leave their belongings, for I could no longer wait for the mobile lockers to arrive. Good thing I did not hold out for them either, as I found out later that the driver overslept and did not arrive with the lockers until well after my race began.

As I was standing in a long line comprised mainly of runners competing in the 5K and half marathon events that were commencing later in the morning, I heard the national anthem and then saw my fellow marathoners starting down the road. After several minutes, I got the attention of a volunteer and stammered, “I don’t know what I’m doing and my race just started without me.” He told me to drop my bag, that he would take care of it, and from there I hurried to the course and crossed the starting line well after the rest of the field.

While I prepare meticulously for race-day logistics, my pre-race plans went out the window due to the chaos that ensued from the mobile lockers’ absence. About a mile down the road, I realized I had accidentally left two of my three anti-nausea medicines in the bag I checked with the volunteer. Such a mistake was quite concerning, as nausea tends to be my limiting factor in marathons, even more than muscle soreness or general fatigue.

Not having my medication only compounded problems that began with a poor training cycle due to a herniated disc in my lower back, an abdominal hernia for which surgery was scheduled six days after the marathon, and a couple of other medical hindrances. Things were not looking good already, and yet they got worse.

Quickly, my fellow runners and I discovered that hydration was going to be a problem. Unlike most marathons that offer both water and sports drinks regularly along the course, most of the beverage stations on this course featured only water. Moreover, the cups were maybe a quarter full. Subtract from that the fluid that splashed out during the drinking process, and the net amount that made it down my throat was not nearly enough to keep me hydrated. The stations that did offer a beverage other than water had a low-calorie electrolyte drink, woefully insufficient to replenish the carbohydrates expended during such an endeavor.

Despite these challenges, I was inexplicably on pace for my all-time best marathon through mile 18, but by then things were getting ridiculous. We had not had a beverage station since mile 13, no electrolyte drink since probably mile 11, and the course was in the midst of a miles-long uphill stretch that felt more challenging to me than Boston’s Heartbreak Hill ever has.

The nausea, which had been building slowly, was pronounced enough where I felt like the time was right to use the one anti-nausea medication that I remembered to bring out on the course with me. In keeping with the theme of the day, the pills promptly fell out of my Ziploc bag onto the road. The quiet tick of the medication hitting the pavement was likely inaudible to anybody else, but to me it was the thunder of my last hope for a great marathon finish crashing down.

Limited by nausea and dehydration-induced muscle cramping, my pace slowed significantly over the final miles. Around mile 25, a blister that I did not know I had burst on the bottom of my right foot, altering my gait and slowing me even further. Hobbled, I kept running and crossed the finish line limping.

Somehow, out of the day’s nonsense sprang my fastest marathon time in 15 years, but this is less a story of resolve and more a tale of someone struggling in real time to weigh the pros and cons of disregarding or honoring his body’s signals, which in this case were clearly telling me to drop out of the race.

The course was essentially a figure eight with the start, midpoint, and finish all at the center. If I was going to call it a day early, hitting the eject button at the midpoint made the most sense, so I took stock of the situation as I neared the 13.1-mile mark. Inadequate fluids, dehydration and cramping that were already setting in, insufficient medication, and memories of my 2004 Boston marathon – which ended with an ambulance ride to the emergency room – all suggested that dropping out was the sensible and safest play.

On the other hand, my speed was inexplicably fast up to that point and I did not want to take for granted that I would ever have a shot at a marathon personal best again. While I reserve the right to change my mind, I went into this race figuring it was probably my last marathon. While I enjoy the training and racing, impending parenthood had me looking at the situation from a different perspective. Long training runs take a lot out of me, so much so that I am pretty much useless the rest of the day, and I do not think it is fair to put our daughter in a position where daddy cannot play, or go to the playground, or go for a walk, or do pretty much anything at all because he ran far and needs to rest.

Even if I do decide to train for another marathon someday, who knows, I could wake up sick on race day, or sprain my ankle on a Baby Einstein guitar while heading out the door to the starting line, or suffer any item on a tremendously long list of inflictions or mishaps beyond my control that could throw the whole endeavor out the window at any point in my training cycle or at the very last instant.

As I neared the half, I was cognizant of the reality that being 13 miles into a marathon with a chance for a personal best might never happen again. For as much had gone wrong, a lot had also gone right to allow me to be in such a position. Having weighed the pros and cons, I decided to continue on with the race despite all of the reasons to stop.

Disregarding my body’s cues eventually caught up with me. A few minutes after I crossed the finish line, the nausea worsened, I was shivering (a symptom of dehydration) despite the warm temperatures, and my breathing was abnormally rapid. Laying face up in the sun while wearing a hooded sweatshirt and winter jacket did not help. With my condition deteriorating, I made my way to the medical tent.

The paramedics took my blood pressure, which was sky high compared to my norm, and I was having trouble answering their questions. While I have a history of occasionally feeling miserable after long runs, this was worse than my norm. The scariest part to me was that I was aware of my incoherence, yet I could not do anything about it. They asked me what medications I take, but I could not put together an articulate response. In my mind, I was like, “Come on, dude, you know what meds you take, just tell them,” but I was incapable of getting the words out.

The paramedics wrapped me in blankets, put me in the back of an ambulance, and cranked the heat to warm me. They gave me oxygen and placed leads to monitor my pulse, heart rhythm, and oxygen saturation. After two hours of laying on the gurney getting rehydrated and warmed, we agreed that I was well enough – but albeit still far from 100% – to leave the ambulance and make my way back to my car.

Stepping out of the ambulance, I was startled to discover that the finish area was virtually deserted, as the spectators, volunteers, race organizers, and my fellow runners had pretty much all gone home. Watching the few remaining workers disassemble the food tent and the final handful of artifacts from a post-race party that had presumably been so happy and festive just a short time earlier, I felt an eerie and unsettling sensation: loneliness.

Later that evening, Joanne commented over dinner that I looked sad. She was right. Ending up in an ambulance with a health scare is no way to conclude an event. Finishing a marathon normally yields a significant sense of accomplishment, but this time I felt conflicted and somewhat hollow. Even though completing the course was a triumph of sorts, I had mixed feelings for having put myself in unnecessary jeopardy.

Like I tell my patients who are working on listening to and honoring their internal cues: assessing hunger and fullness levels, sorting through matching criteria, checking for humming and beckoning, and utilizing other intuitive eating tools are never meant to be leading questions, and there are no such things as absolute right answers. Decisions made regarding what, when, and how much to eat matter much less than having utilized a thoughtful process to reach them.

Similarly, having considered all of the pros and cons of the options available to me at the moment I had to make a choice, I feel like continuing to run was the best course of action for me despite my body’s cues suggesting that I stop. Ultimately, I am glad I finished the race even if I did pay a price for my decision. 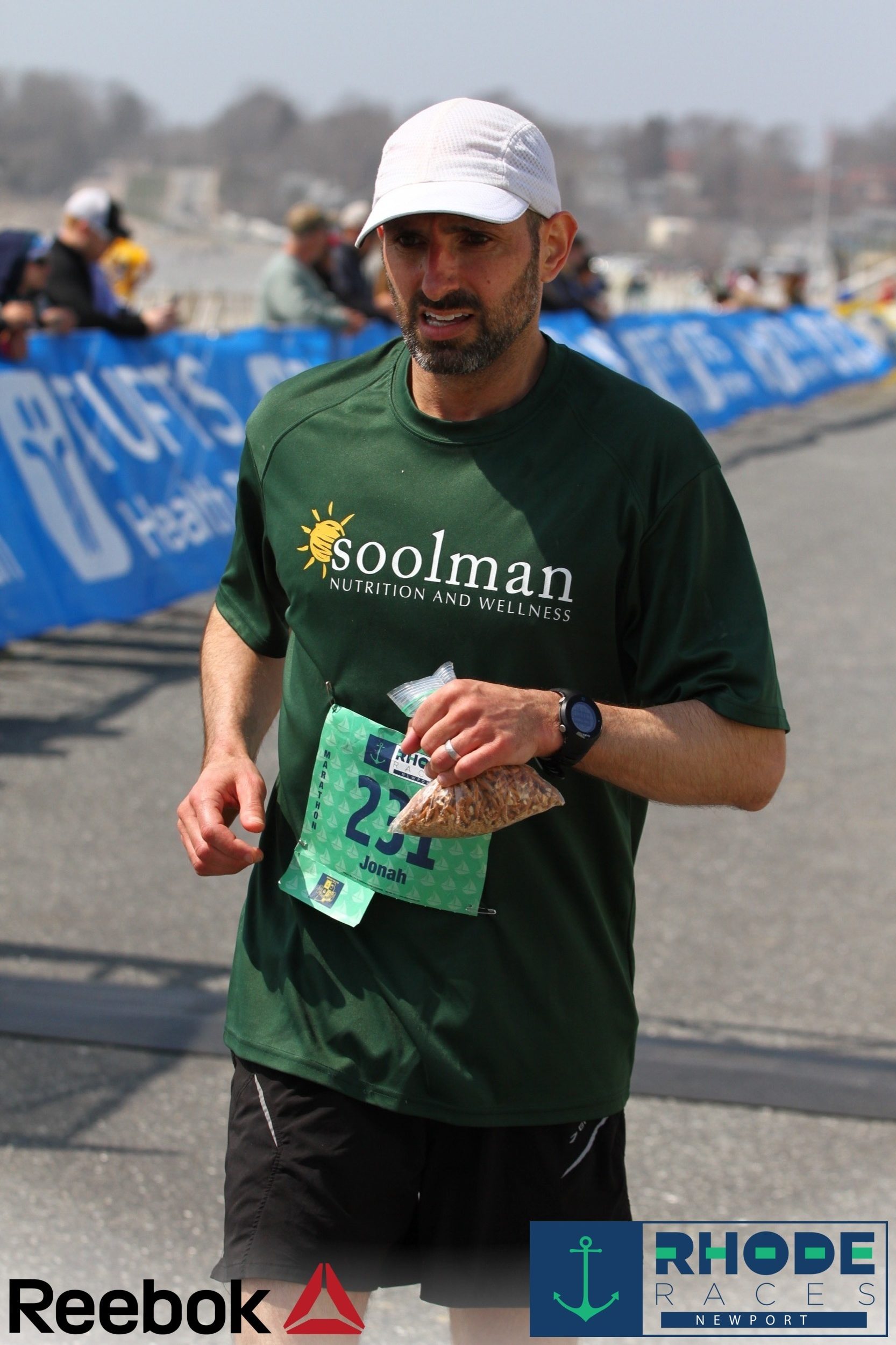 Just after crossing the finish line. Am I having fun or what?